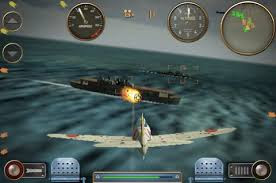 version: 1.0.2
Requirements: Android 2/1 +
Features: 3D Game-letalka with stunning graphics. Dogfights in the skies of World War II. 10 missions in the Pacific campaign and European theaters of war. Multiple modes and tons of gunfire and training mission. Squadron 100 exercises.
Stunning graphics: a few areas, including mountains, deserts and seas in order to demonstrate the true view of air combat of the Great Patriotic War. Interaction with opponents from around the world via the Internet with EDGE, 3G and WiFi.
Multiplayer game (up to 8 opponents) through 3G, WiFi and Bluetooth connectivity, and includes a sophisticated multiplayer mode, "Protecting the base," which requires a higher level of play the team and strategic partnerships. On land and sea, you and your friends can join together to protect the base and destroy the enemy compounds, or show off their piloting skills to the full.