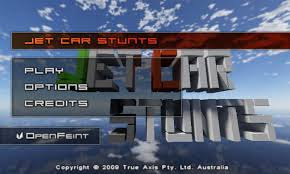 Jet Car Stunts is an award winning, over the top, adrenaline rush, 3D driving game, with massive jumps, mid-air hoops, floating platforms, spiral roadways and outlandish maneuvers in impossible environments. The orginonal levels, tight controls and fast, smooth, addictive game play has landed Jet Car Stunts on many "Best of 2009" lists for iOS and now it is available on Android.

Jet Car Stunts is less like a driving game and more like a platformer. Rather then racing opponents around a track, your opponent is the track its self. Get ready for a challenge, because getting to the end of these insane tracks will test your skills.