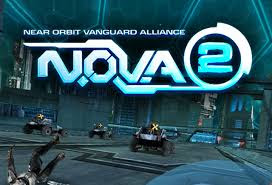 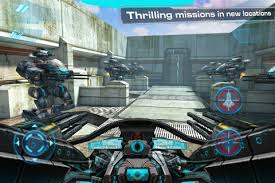 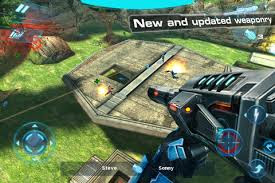 The ultimate sci-fi FPS is back! Get ready to step into a whole new level of gaming!

Pocket Gamer - 9/10 + Gold Award: "(It replaces) its predecessor with sharper action, killer graphics, and the best multiplayer experience around."
IGN - 8.5/10 + Editor's Choice: "The controls are smooth, which helps so much when the action gets furious."
The AppEra: "N.O.V.A. 2 is simply the BEST FPS."
TouchGen: "Intense and highly addictive."
148apps: "N.O.V.A. 2 really does feel almost console worthy."
App Advice: "The best online multiplayer around with quick connection, and ten player battles."
---------------------------------------------
BETTER, FASTER, STRONGER!
- Meet new enemies with improved AI!
- Master a larger range of weapons & powers
- Much more diversified gameplay: run, shoot, fall, drive a motorbike, pilot a giant mech, and blast a laser
- The more, the merrier, now with up to 10 players in 10 multiplayer maps
- Build a career and rise through the multiplayer leaderboard
- Explore new locations, offering amazing graphics
- Enjoyed the first N.O.V.A. – Near Orbit Vanguard Alliance HD? Be rewarded with extra bonuses.
6 years have passed since the events depicted in the first episode.
Humanity is now thrown into a bloody civil war fought on one side by the central government of the Terran Orbitals and the self-appointed Human-Alien Alliance; a new organization with a mysterious origin and agenda. Kal Wardin left active service in N.O.V.A. years ago and now lives among the colonists of the desert planet Scorpius.
But war never spares even the most peaceful places...
AN UNPARALLELED SINGLE-PLAYER CAMPAIGN:
- 12 chapters taking you through hostile, yet amazing environments of various Orbitals
- Over a dozen weapons including the Dual Hand Guns, Assault Rifle, Shotgun, Automatic Shotgun, Sniper Rifle, Rocket Launcher, Grenade Launcher, Alien Plasma Gun, Alien Lightning Gun, Alien Laser Gun, Turrets, Frag Grenades and Mines
- 3 special powers: Freeze, Slow Time and Disc for melee combat
- A wide range of enemies with improved AI, for even more intense combats

INTENSE MULTIPLAYER MODES:
- 1 to 10 players online or locally
- 5 modes: Free for All, Team Deathmatch, Capture the Flag, Freeze Tag and InstaGib
- Ranking & Perk systems
- 10 maps on which to battle it out
- Play against your friends or the entire world through Gameloft LIVE!
- Worldwide leaderboards in the game & on the official website, www.near-orbit-vanguard-alliance.com
DOWNLOAD apk+data:
part1    part2    part3    part4     part5

is this work for froyo??

Thx, erm I ve seen ur other posts, can u make the link fr modern c. ss in .apk and .rar format. Havin prob with .7z

Btw, I was wrong with the password I got it workin. And fyi there is a a param error. I think u shld put the old one back, sorry :x

this version is also working fine like previous one

Can u give me the link fr data and .apk in enterupload ? Its keeps sayin unvalid params in the new link & the other one is in some language...

@optimus you can use depositfiles link to download apk and data

@optimus actually my enterupload nova2 version has some force close issues in level3 consider downloading from my previous post it has no issues http://mobilecyberzone.blogspot.com/2011/07/nova-hd-320x480-resolution.html

can you make asphalt 6 with this resolution??

hey, a can´t play on galaxy ace android 2.3.4 after the video the dysplay put on black, and return the screen home. -note:used with and without chainfire 3d (nvidia,qualcomm,powervr)and i can´t launch the game.... U_U

i will be soon back with full functional nova version

hi downlodead and installed but it seems that game is going out of screen and is having very low fps using lg optimus one...... please help

The same problem. After the video the display put on black, and return the screen home. I try to download sd data from here and through wifi too but no change. :( (using galaxy ACE)

brother i have downloaded both data and apk from this site my phone not recognising data file what to do? i am using optimus one p500,

Not able to play video,galaxy ace droid 2.3.3 how to convert video size,so it may play on my phone?

Even convert videos already on it still will not work. You have to use titanium backups to restore data+apps. it works.

Once ive installed the game its still asking me to download via wifi.. what should i do ?

i tried this and other nova2 download link...and it said that i need to connect to internet (wifi only) to download some data...is that ok,i dont have wifi at home.. :/ (sorry for bad english :D )

http://www.enterupload.com/iilfzxyoylyb/GloftN2HP.rar.html is it good for the data download
it give size of 355.2 mb please suggest

hey man can you upload more of these shooting and adventurous games for 320*480 , like sandstorm and assassins creed? it will make my wife really happy!!

yes dude pls do upload !! i love this blog!!

plz upload it on mediafire

i have downloaded the sd files with 3G network, when i launch the game it shows cant play this video then it closes automatically when i change the resolution it ask for more data download, PLZ HELP WHAT TO DO

i am using xperia play........after copying sd files it show to download from wifi.ithink the path is incorrect help me

in fileupload dont work are so much slowly and the other link dont work please i like play nova please!!

Xperia mini pro I let the data download through wifi. Video converted to 320x480 using FF, but there is still no place for the hud on my screen while playing, and the menu appears to be too big also...

is dis work in se live wd walkman.....?help me plz

Why this game close in my xperia x8?plz help me.

Why this game close in my xperia x8?plz help me.

does it works on motorola cliq xt
?!!!

Boss, links to all the games for 320X480 are removed & dead. Tried it for PES, NOVA 2, Real Football, NFS, all links lead to "file removed". Could you pls update. Am a big big Fan of your blog..have got so many games from you. Pls repair the links. Thanks in advance.

Alright dear.. guess I need to wait for some time then. No problem at all. Take ur time & do get us back our 320X480 res games cos we hav'nt upgraded to higher res yet. Thankxx a lot bro..u rock :)

I read this piece of writing completely on the topic of the difference of newest and previous technologies, it's amazing article.

Excellent post. I was checking continuously this blog and I am impressed!
Extremely useful info specifically the last part :) I care for such information a lot.
I was looking for this particular info for a long time.
Thank you and best of luck.

NOVA 2 is an amazing game and I have downloaded the APK file you provide! Its working good...
Thanks Dude!
Android Next Launcher 3D Shell APK